4.4.4 - The Rhizobium-legume symbiosis is fine-tuned by a molecular dialogue

Over the last 30 years, the molecular, cellular and genetic analysis of the association between legumes and rhizobia has given us a detailed insight into the specificity and regulation of this symbiosis. As a prerequisite for the symbiosis, the symbionts have to first recognise each other in the soil; the plant host then attracts specific rhizobial symbionts that only nodulate one or a few specific hosts; in response, the rhizobia initiate infection and nodule development. On a whole-plant level, the plant strictly regulates the number of nodules on the root system depending on carbon availability relative to nitrogen demand (See ‘Case Study 4.3 - Regulation of nodule numbers’).

The attraction of rhizobia to the root system of its appropriate host is initiated by the exudation of flavonoids by the plant roots. Flavonoids are a diverse class of phenolic compounds that share a common 15-carbon skeleton consisting of two phenyl rings and a heterocyclic ring, but differ in their exact final structure, for example through modification of the flavonoid ‘backbone’ through hydroxylation, methylation or glycosylation. Over ten thousand different flavonoid molecules have been identified from different plant species. Each legume species exudes a specific mixture of flavonoids into the soil that chemotactically attract their rhizobial symbionts (Figure 4.44). Flavonoids have evolved into specific signalling molecules in the symbiosis by binding specifically to a transcription factor, NodD, inside the rhizobia. This binding of the correct flavonoid activates NodD, and allows it to bind to and activate the promoter regions of a large number of nodulation genes. These nodulation genes of rhizobia are responsible for synthesising a specific signalling molecule, the Nod factor, as well as other genes necessary for symbiosis.

Figure 4.44 Examples of flavonoids produced by different legume hosts to activate Nod gene expression in their symbiont. Luteolin is a Nod gene inducer produced by Medicago sp., while daidzein is made by bean and soybean.

Nod factors are lipochitin-oligosaccharides that are composed of a short ‘backbone’ of N-acetylglucosamine units (the same building blocks that are polymerised to chitin in fungal cell walls, insect exoskeletons and crustacean shells). This backbone typically varies in length between 3-6 units, and is additionally ‘decorated’ with chemical substitutions like acetylation, sulfation or glycosylation (Figure 4.45). Importantly, an acyl side chain of specific length and saturation pattern gives each Nod factor molecule its specificity. Different strains of rhizobia produce specific (mixtures of) Nod factor molecules, which are only recognised by their specific hosts. The Nod factor molecule is crucial for nodulation; mutants defective in Nod factor synthesis cannot nodulate their hosts. Nod factor molecules are also partially sufficient for many of the nodulation steps: application of purified Nod factors to the correct hosts initiates root hair curling and nodule development, but will not lead to infection threads or fully formed nodules. For the complete symbiosis to succeed, other signalling molecules from rhizobia are necessary. For example, surface molecules like exopolysaccharides are necessary to evade host defence responses (Figure 4.45), and communication signals like quorum-sensing signals are necessary to coordinate bacteria behaviours during nitrogen fixation. 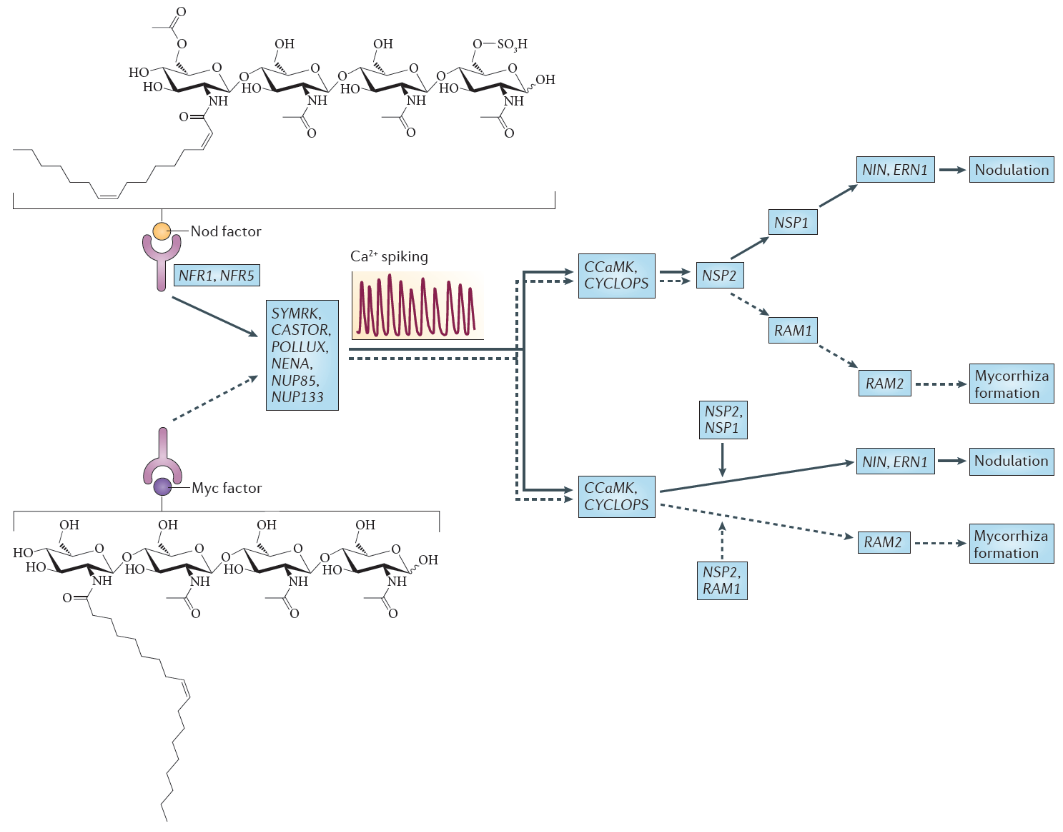 Figure 4.45 Nod factor and Myc factor signalling. The structure of the predominant Nod factor from Sinorhizobium meliloti, the symbiont of the legume Medicago truncatula, is shown (top), in comparison with the structure of the non-sulphated lipochitooligosaccharide Myc factor produced by the arbuscular mycorrhizal fungus Glomus intraradices (bottom). These molecules induce the symbiosis signalling pathway, that shares a calcium spiking response. There are two different interpretations for the genetic overview of this signalling pathway. These interpretations are an amalgamation of genetic analyses in Lotus japonicus and Medicago truncatula; gene names are indicated for the model legume L. japonicus. In the first interpretation (top), the symbiosis signalling pathway transmits the signal through the transcription factors encoded by nodulation signalling pathway 2 (NSP2), NSP1and RAM1 (required for arbuscular mycorrhization 1), whereas in the second interpretation (bottom), symbiosis signalling occurs in parallel to the signalling through these GRAS domain transcription factors. Names for these genes in M. truncatula are as follows: Nod factor receptor 1 (NFR1) is LysM domain receptor kinase 3 (LYK3); NFR5 is Nod factor perception (NFP); symbiosis receptor-like kinase (SYMRK) is DMI2; POLLUX is DMI1; calcium- and calmodulin-dependent serine/threonine protein kinase (CCAMK) is also known as DMI3; CYCLOPS is interacting protein of DMI3 (IPD3). (Reproduced by permission from Macmillan Publishers Ltd from G.E.D. Oldroyd, Nature Rev Microbiol 11: 252-632, 2013)

Nod factors are recognised by their host by Nod factor receptors. Binding of the correct Nod factor structure activates a signalling cascade in the infected root hairs. A critical part of the signalling cascade is a periodic spiking of calcium concentrations in the root hair (‘calcium spiking’), which starts within minutes of Nod factor perception (Figure 4.45). Calcium spiking activates downstream transcription factors that lead to the activation of cytokinin signaling. The plant hormone cytokinin is necessary, and in some cases sufficient to induce cell divisions in the root cortex, the first step of nodule initiation.

Figure 4.46 Rhizobial and mycorrhizal colonization. a, Flavonoids released by the legume root signal to rhizobia in the rhizosphere, which in turn produce Nod factors that are recognized by the plant. Nod factor perception activates the symbiosis signalling pathway, leading to calcium oscillations, initially in epidermal cells but later also in cortical cells preceding their colonisation (See Figure 3.21). Rhizobia gain entry by infection root hair cells that grow around the bacteria attached at the root surface, trapping the bacteria inside a root hair curl. Infection threads are invaginations of the plant cell that are initiated at the site of root hair curls and allow invasion of the rhizobia into the root tissue. The nucleus relocates to the site of infection, and an alignment of ER and cytoskeleton, known as the pre-infection thread, predicts the path of the infection thread. Nodules initiate below the site of bacterial infection and form by de novo initiation of a nodule meristem in the root cortex. The infection threads grow towards the emergent nodules and ramify within the nodule tissue. In some cases, the rhizobia remain inside the infection threads, but more often, the bacteria are released into membrane-bound compartments inside the cells of the nodule, where the bacteria can differentiate into a nitrogen-fixing state. b, Strigolactone release by the plant root signals to arbuscular mycorrhizal fungi (AMF) in the rhizosphere. Perception of strigolactones promotes spore germination and hyphal branching. AMF produce mycorrhizal factors (Myc factors), including lipochitooligosaccharide (LCOs) and, possibly, signals that activate the symbiosis signalling pathway in the root, leading to calcium oscillations. AMF invasion involves an infection peg from the hyphopodium that allows fungal hyphal growth into the root epidermal cell. The route of hyphal invasion in the plant cell is predicted by a pre-penetration apparatus, which is a clustering of ER and cytoskeleton in a zone of the cell below the first point of fungal contact. The fungus colonizes the plant root cortex through intercellular hyphal growth. Arbuscules are formed in inner root cortical cells from the intercellular hyphae. (Reproduced by permission from Macmillan Publishers Ltd from G.E.D. Oldroyd, Nature Rev Microbiol 11: 252-632, 2013. Part b image is modified by permission from M. Parniske Nature Rev Microbiol 6: 736-775, 2008)

One of the most significant findings of recent years has been the discovery that the same early machinery for Nod factor signal transduction is also required to signal a successful interaction between mycorrhizal fungi and plants (Figure 4.45), and both symbioses share similar mechanisms of bacterial or fungal invasion (Figure 4.46). Mycorrhizal fungi have evolved symbioses with the majority of plant plants much earlier (~400 MYA) than the emergence of the Rhizobium-legume symbiosis (~100 MYA) (see previous section 4.3 on mycorrhiza). Mycorrhizal fungi produce signals that are structurally closely related to Nod factors, and these have been termed ‘Myc factors’. Myc factors are thought to be perceived by different receptors to the Nod factor receptors. Despite some of the shared signals, including calcium spiking, activated by both Myc factors and Nod factors, the later responses in the root differ, leading either to nodulation or to mycorrhization (Figure 4.45). It is still not known what enables legumes to form nodules in response to Nod factors, but other plants not; however, the knowledge that mycorrhizal signalling is part of the response machinery present in all plants that form mycorrhizal symbioses might make it easier to engineer non-legume crops with the ability to form rhizobial symbioses (Rogers and Oldroyd 2014).

Having established the initial contact with the legume host, rhizobia invade the young, just emerging root hairs of their legume partners. In some species, infection can occur intercellularly, and this may have been also the initial mode of infection at the early evolutionary stage of the symbiosis (Held et al. 2014). The infected root hairs curl around small colonies or single cells of rhizobia to form a typical ‘Sheppard’s crook’. The rhizobia locally digest the cell wall of the root hair and induce the formation of ‘infection threads’, tubular invaginations of the root hair in which the rhizobia multiply and travel towards the cortex of the root. This infection step requires correct Nod factor and exopolysaccharide structures from rhizobia, otherwise infection threads are aborted by the plant through defence responses (Figure 4.47). From the infection threads, rhizobia are released into cortical cells as small vesicles, in which rhizobia remain separated from the plant cytoplasm by the plasma membrane. In these vesicles, called symbiosomes, rhizobia differentiate into bacteroids, the nitrogen-fixing forms of rhizobia (Figure 3.49). 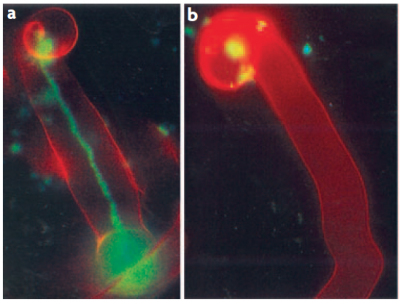 Concurrent with the growth of the infection thread towards the root cortex, Nod factors produced by the invading rhizobia trigger the re-initiation of cell division in the cortex. These divisions are activated through cytokinin and auxin gradients that the plant forms in response to Nod factors (Desbrosses and Stougaard 2011). In some legumes and actinorhizal plants, the invading rhizobia do not initiate nodules de novo from cortical cells, but target an emerging lateral root primordium that is then ‘converted’ into a nodule.

One surprising recent discovery has been the identification of rhizobia that nodulate legumes in the absence of Nod factors. Sequencing of a large number of Rhizobium species uncovered rhizobial genomes that do not contain any of the canonical nodulation genes that would be required to make Nod factors. It is still unclear what the signal is that these rhizobia use to regulate infection and nodule formation. Similarly, Frankia symbionts do not produce Nod factors, yet use some of the same symbiotic (SYM) signal transduction cascade as legumes. Unravelling the identity and mode of action of these unknown nodulation signals will be a rewarding future challenge.