Shoot apical meristems are minute yet complex structures that are ensheathed within new developing leaves or bracts. A vegetative meristem gives rise to leaves or other organs, for example thorns and tendrils. Axillary buds are themselves complete shoot meristems from which branches are produced (cf. lateral roots described above). In angiosperms, when a plant shifts from vegetative to reproductive growth some meristems undergo a transition to the reproductive state and give rise either to multiple flowers in an inflorescence, as in mango (Figure 7.6a), or to a single terminal flower, for example a poppy or waterlily (Figure 7.6b). All axial growth from meristems, be they vegetative or floral, is continuous or indeterminate until topped by the formation of a flower. When this occurs, floral organ primordia arise in whorls from the shoot meristem and differentiate into the familiar sepals, petals, stamens and carpels. 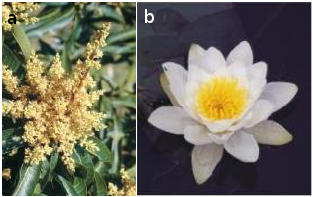 Sometimes, however, the indeterminate inflorescence meristem reverts back instead to a vegetative status. Think of a bottlebrush or a pineapple with a leafy axis extending beyond the flower or fruit (Figure 7.7). What determines whether a meristem is vegetative or floral? In many species, environmental signals cause the switching between vegetative and floral states and a picture is now emerging of the genes and molecular mechanisms responsible for deﬁning structures that are generated by meristems.

Although meristems function as generic sources of cells for differentiation into organs, each type of meristem is programmed to produce only certain structures. Across all species, there is a small, ﬁnite range of these structures, yet we observe an amazingly diverse array of ﬁnal vegetative and floral morphologies. A leaf is always recognisable as a leaf but consider the vast structural differences between a pine needle, a waterlily pad and a tree fern frond. The generation and spatial patterning of plant organs are determined by early events within the vegetative meristem. This precise positioning of organs around the shoot meristem is called phyllotaxis. Later in development, a dramatic meristematic switch will give rise to a terminal inflorescence, often with an abrupt change in patterning of organs. Phyllotaxis also applies to floral structures, for example spiral patterns of scales of a pine cone or bottlebrush flowers (Figure 7.7). 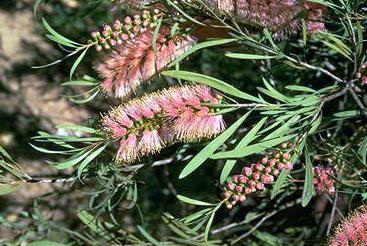 Organ spacing is a ﬁnal determinant of shoot appearance. For example, leaves forming a rosette as in Arabidopsis are separated by short internodes compared with longer internodes intervening between whorls of leaves of a blue gum seedling. The resulting morphologies are strikingly different. The question of what determines phyllotaxis and internode length is discussed later. 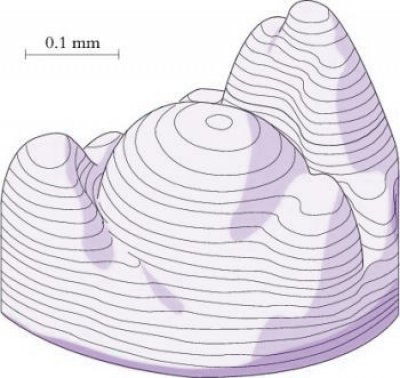 Shoot meristems are small, with a dome typically of 100–300 µm in diameter consisting of no more than a few hundred cells. In the 1970s, Williams (1974) published elegant reconstructions of shoot meristems derived from serial sections (Figure 7.8) which revealed the extent of variability in the shape and dimensions of shoot apices. However, the overriding organisation is of a central dome with groups of cells partitioned off from its periphery to form either determinate organ primordia or secondary meristems (axillary buds). Some cells in between are not destined to become primordia and will instead later become the internodes of the axis. Different models have been proposed to describe the regions of shoot meristems. In a functional sense, vegetative meristems have three main components: the central zone, peripheral zone and the ﬁle meristem zone, all of which tend to disappear or become indistinct in infloresence meristems (Figure 7.9). 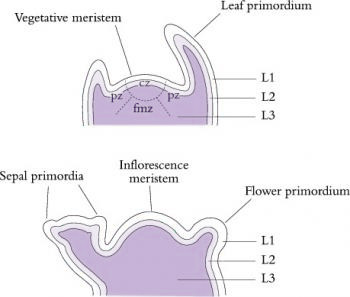 Figure 7.9 The structure and zonation of shoot apices can be described in two main ways. Zonation in vegetative apices (top) can be based on relative cell division rates and differential staining; central zone (cz, slow division rate), peripheral zone (pz) and file meristem zone (fmz). Layers of cells are usually also visible. L1 and L2 are often referred to as the tunica and L3 as the corpus. The layering remains visible during early floral development (bottom), but the central zone disappears in determinate inflorescences. (Based on Huala and Sussex 1993)

Superimposed on this functional zonation are usually three distinct cell layers which give rise to separate cell lineages (Kerstetter and Hake 1997). These cell layers, designated L1, L2 and L3, are distinguishable by their positions in the meristem and their pattern of cell divisions, and are evident in both vegetative and reproductive meristems. Surface cells of L1 divide anticlinally while within the meristem and during sub-sequent differentiation of the organs. Not surprisingly, they form the epidermis. Within the apical dome, the plane of cell division within L2 is also purely anticlinal, but later on during organ formation divisions occur in other planes. In contrast, cells of the deepest layer, L3, divide in all planes. The two inner layers, L2 and L3, contribute cells to form the body of the plant with the proportion of cells derived from each layer varying in different organ types. Although the cell lineages produced by each layer usually contribute to distinct regions within each organ, invasion of cell derivatives of one layer into another has been observed.

Invading cells differentiate in accordance with their new position, which we interpret to mean that developmental fate of cells appears to be governed more by position than by cell lineage. However, meristematic cells may already be functionally distinct as evidenced by patterns of gene expression which reflect the layered cellular organisation (Figure 7.10). 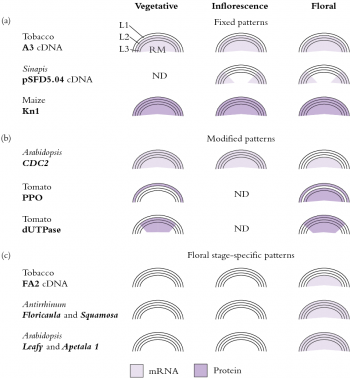 Figure 7.10 Complexities of meristem functioning are revealed by specific staining (in situ mRNA hybridisation and antibody techniques) for expression of different genes. Dark shading represents protein patterns, light shading represents mRNA expression. Many of these patterns match the zonations in Figure 7.9. (Based on Meeks-Wagner 1993)

In order to maintain the very precise organisation of vegetative meristems over long periods, or to accommodate rapid changes during flower formation, some signalling process must exist to coordinate division between the cell layers. Evidence for such signalling has been established through the development of chimeras, where genetically different cell types exist together in a single apex, yet still achieve normal developmental patterns.

We previously raised the question of what determines phyllotaxis and internode length. Organs derived from the shoot meristem can arise in whorls (two or more organs simultaneously at one node), alternately (two ﬁles displaced by 180° with a single organ at each node) or in spirals (each organ displaced from the previous one by approximately 137° with a single organ at each node). These organs may be separated by very short or long internodes. Phyllotaxis patterns are usually stable, but often change abruptly with floral induction or when seedlings undergo transition to their mature morphology. In many species of Eucalyptus, this ‘phase change’ from juvenile to adult is very striking and is accompanied by a change from whorled to alternate or spiral phyllotaxis. How is the change in phyllotaxis effected? We gain some insight from experiments on chrysanthemum meristems where application of the inhibitor of polar auxin transport TIBA (tri-iodo benzoic acid) induced changes in internode length and displacement angle between leaf primordia. The data are consistent with a change from 137° spiral (control) to alternate (50 ppm TIBA) phyllotaxis and are presumed to result from increased concentrations of auxin in the meristem resulting from inhibition of transport away from the existing primordia. Meristems are deduced to be sites of auxin synthesis (Schwabe and Clewer 1984). One interpretation is that each primordium acts as a ﬁeld with a deﬁned radius of inhibition preventing other primordia from initiating too close to it. Another option is mechanical control by pressure and tension gradients within the meristem (Green et al. 1996). Supporting evidence comes from experiments on cells in tissue culture in which applied pressure altered their morphogenetic patterns. At a whole-plant scale, tension and compression wood in trees are further examples of speciﬁc developmental responses to physical forces.

Meristems as templates for morphogenesis

The location and activity of individual meristems give rise to the diverse morphologies we recognise within the Plant Kingdom. Palms and grass trees have a distinctive morphogenesis with the entire shoot canopy produced from the activity of a single apical meristem. Removal of the crown of a coconut palm inevitably kills the whole plant. The roots of palms and grass trees are also extraordinary in that they grow and senesce in a seasonal pattern which confers tolerance to poor soils and ﬁre.

In contrast, woody trees produce complex shoot morphologies through combined activity of terminal and lateral apices. We see the product in the height and diverse branching pattern of large trees. Australian eucalypts show a diversity of shoot forms, ranging from the single slender trunk of a mountain ash or karri, topped by a branched canopy, to the multiple trunks of mallee eucalypts. The branching form of mallee species is determined by simultaneous activity of many apical meristems. Similarly, excavation of roots of large trees has often revealed complex branching patterns which enable effective exploration of large volumes of soil and extraction of water and nutrients. In the case of Eucalyptus marginata, a root system arises from strong meristematic activity in the surface levels of the root system as well as proliferation of deep sinker roots. Some species within the Proteaceae can form proteoid (cluster) roots that are adapted to nutrient-poor soils.

Grasses have a distinctive morphology which arises from the local activity of intercalary meristems. These meristems give rise to semi-autonomous plants called tillers which comprise leaves, stems and reproductive parts and are subtended by nodal roots. Cell divisions within the intercalary meristem are developmentally responsible for the characteristic morphology of grasses, a family that is well adapted to herbivory.