Although roots are sometimes neglected by researchers and called the ‘forgotten half’ or ‘hidden half’ of plants, root apical meristems have been studied extensively for two reasons. First, roots are viewed as a simpler system than shoot meristems – the root meristem is much more accessible than the shoot meristem which is ensheathed by developing leaves. Second, complicating lateral structures arise from the terminal shoot meristem (leaf and bud initials) but not from the terminal root meristem, which produces cells solely for the primary axis. This is where the simplicity ends. A primary root meristem generates two tissues simultaneously, the main root axis extending proximally towards the shoot, and the root cap pushing relentlessly forward into the soil, succumbing to sloughing and hence rapid turnover. The detailed organisation of root meristems, which we consider here primarily from the view of the cell biologist, reveals deeper complexities and questions of cell determination.

Lateral root meristems enable generation of massive networks of ﬁne roots. The evolutionary processes which led to root systems of a very branched nature (e.g. grasses) through to coarse unbranched root systems (e.g. orchids) are a fascinating basis for further research into control of root branching. In addition, molecular intervention is giving us new plant forms which can be used to unravel the controls on root development and branching.

Primary roots arise through controlled cell divisions in the apical meristem and subsequent expansion and differentiation of these cells. Root formation (rhizogenesis) is usually extremely rapid: daughter cells exiting the meristem may be found 24 h later in a fully differentiated structure (e.g. phloem), even though further modiﬁcations to cell function are still possible (e.g. formation of an exodermis). 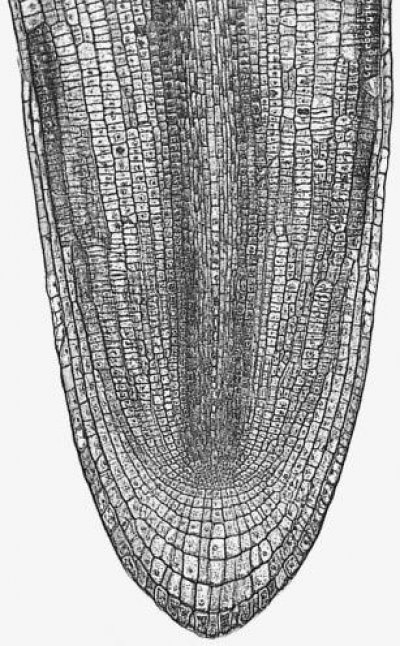 Figure 7.3 Longitudinal section through a primary root tip of radish (Raphanus sativus). Files of cells extend forward from the centre of the apex to form the root cap, and backwards to form the main root tissues. (Based on Raven et al. 1992)

Critical steps in setting up dimensions and thickness of the root axis, and supply of cells to the zone of elongation, are the rate and position of cell divisions in the meristem. This can be appreciated from the two-dimensional view of a developing radish root in Figure 7.3. Divisions can be in any of three planes, either anticlinal (normal to the root axis), periclinal (tangential to the root axis) or radial to the axis. These divisions will give rise, respectively, to increased root length, increased root thickness (more layers of cells through the root), or increased root circumference. The apical meristem supplies all the cells for the primary root axis and the consequences of the planes of cell division are evident long after meristematic activity ceases.

Separate cell divisions at the leading edge of the root meristem generate a root cap which extends forward as a protective structure. The central cells of the root cap are often oriented in longitudinal arrays (columella) and are destined for rapid attrition as the ‘advancing’ soil particles slough off the surface layers. These cells also fulﬁl a vital chemico-physical role by secreting a glycoprotein-rich mucigel which reduces friction between root and soil matrix. Root caps advance at a dramatic speed: a root might elongate by 5 cm per day and new root cap cells can be pushed in advance of the apex of the primary axis at about the same rate. This means that the leading tip of a primary root, supplied with new root cap cells, advances through the soil at up to 60 µm min–1. The sloughing off of roughly one cell layer per hour may explain our observation that the root cap does not increase in size over time. Intriguingly, root caps are still conspicuous in roots grown in nutrient solutions but still never dominate the primary root axis, so we deduce that sloughing off may induce a feedback mechanism that upregulates root cap meristem activity. 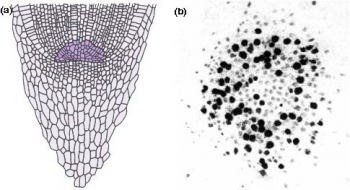 Another remarkable feature of root apices is the quiescent centre, a paradox at the heart of the meristem (Figure 7.4). The quiescent centre is a zone of relatively inactive, slowly dividing cells, numbering about 500–600 in a mature maize root. Its discovery (Clowes 1959) involved studies on mitotic frequencies, thymidine incorporation into nuclear DNA (Figure 7.4b), and ploidy after colchicine treatment. These led to a radical change in view of plant roots. The quiescent centre functions as a reserve of cells which can survive stresses and provide cells to a regenerating meristem. Recovery from surgical removal of parts of the meristem and irradiation to destroy dividing cells supports this concept. Likewise, short determinate lateral roots often lack a quiescent centre, suggesting it is closely tied to sustained indeterminate development.

Passage of cells from meristem to differentiated structures has been studied in simple roots such as ferns in which a single apical cell can be the progenitor of all root cells. Higher plants such as maize or beans have more complex roots, but the whole root can still be traced back to as few as 12 cells in the middle of the quiescent centre (Lyndon 1990). Cell destiny appears to follow predictable patterns, suggesting the notion of clonal development in which cell fate is ﬁxed from the ﬁrst divisions in the meristem. This view is under challenge from experiments using laser ablation. Individual cells, or groups of cells, can be eliminated by laser treatment, then the behaviour of adjacent cells is followed to see how the meristem is organised. This demonstrates that cells have considerable scope for taking over the meristematic role of their nearest neighbours. However, the process depends on physical contact between dividing cells and their daughter cells, which suggests a local transfer of information. The implication is that cell fate and the asymmetric divisions which give rise to various cell lines are regulated at a tissue level, but we do not yet know the nature of the mobile signals which might program cells in the meristem. We next turn to the fate of cells in their temporal journey from division to differentiation.

Cells divide in planes which are identiﬁably targeted to become the various root tissues even before all cell divisions are complete. For example, cells giving rise to the stele are generally clustered around the axis of the root, proximal to the quiescent centre (Figure 7.4a), while those giving rise to outer tissues (endodermis, cortex and epidermis) are peripheral to the pre-stelar cells. In roots of Arabidopsis, which has become a favoured plant for this work, the numbers of cells which generate individual tissues (e.g. eight meristematic cells generate eight cortical ﬁles) are known and the order of divisions giving rise to tissues such as pericycle, cortex and endodermis have been deﬁned.

The changes which cells undergo in root meristems are profound; mitotic activity is most rapid in the distal regions (with a mitotic index of up to 23% in some ﬁles) but the mitotic cycle slows dramatically within 0.5–1.0 mm from a wheat apex. Surprisingly, mitotic frequency in adjacent cell ﬁles can vary widely (Figure 7.5; Table 7.1). 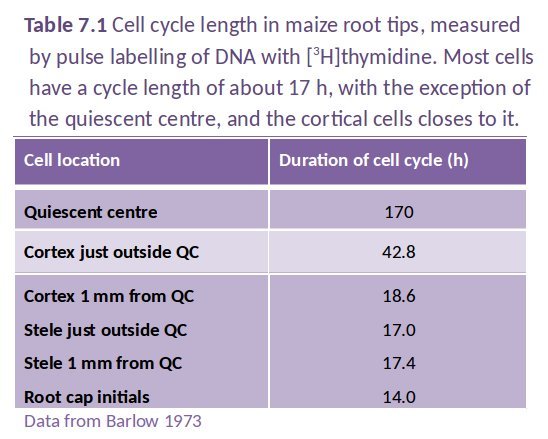 The rate and plane of cell division and subsequent rate of cell elongation determine the rate of delivery of new cells to mature root tissues. The coordination of cell flux is presumably under tight control, achieving the ﬁnal anatomical outcomes recognisable as mature roots – single layers of pericycle and endodermal cells, long conducting vessels and epidermal cells are some examples. The role of growth in cells exiting the meristem and the direction of expansion are major factors in rhizogenesis, with a 30- to 150-fold volume expansion required to generate the primary axis.

Figure 7.5 Cell division rates vary along different zones of the root apical meristem. Frequency of observed cell division is represented by different densities of stippling (onion root tip). (Based on Jensen and Kavaljian 1958)

Lateral roots are important in nutrient and water uptake (Chapter 4.1). The cellular reorganisation which leads to lateral root primordia forming and developing into new axes starts with a latent meristematic activity in the root pericycle being de-repressed and cell divisions resume. Occasionally, endodermal cells are also recruited. Periclinal divisions underlie the out-growth of cells and disruption of the outer tissues of the root. However, before the cortex and epidermis have been penetrated by the young lateral root, it has formed its own terminal meristem and root cap. The new organ is thus prepared for growth in the external matrix. Lateral roots formed from the pericycle must breach the endodermis of the parent root. How is this achieved without rupturing of the Casparian strip and preventing outflow of concentrated nutrients to the cortex? Dyes which penetrate only the apoplasm have shown that endodermal disruption is a transient feature of lateral root growth, but the consequences are not well understood.

Lateral roots generally do not form within 1 cm from the terminal apex, and almost never in the zone of elongation. This makes sense as laterals in the growing zone would act as barbs impeding growth of the primary axis through the soil. An exception which supports this view comes from Eichhornia (water hyacinth) which does produce laterals in the elongation zone very near the root tip, but because of its aquatic environment this does not interfere with growth.