Appreciation of the remarkable plasticity in expression of CAM in response to development and environment has greatly advanced the understanding of the ecological attributes of this photosynthetic pathway. One attempt to bring order to the complexity of CAM expression was the designation of constitutive and facultative categories of CAM. Assignation of these terms requires close monitoring of CAM attributes throughout the life-cycle in response to stochastic environmental events such as water availability.

Constitutive CAM seems securely associated with many massive succulents such as the emblematic columnar cacti in the desert South Western USA but current research also shows it to be prevalent in tropical orchids and bromeliads. Young photosynthetic tissues of constitutive CAM plants are often C3 but CAM is always present at maturity, when the magnitude of the phases of CAM nevertheless remains responsive to stress, light and temperature.

Facultative CAM describes the reversible up-regulation of CAM in response to drought or salinity stress in plants that are otherwise C3 or display low-level CAM. In these, the up-regulated CAM activity is reversible, being reduced (or lost) on removal of stress (Winter et al. 2008; Winter and Holtum 2014). Facultative CAM has been demonstrated in annual plants of seasonally arid environments (e.g. Australia’s desert Calandrinia; Winter and Holtum 2011) as well as in tropical trees of the genus Clusia. The diel patterns of growth in facultative CAM Clusia minor shift from night when in C3 mode to phase III when in CAM mode (Walter et al. 2008).

Slow incremental increase in biomass through vegetative reproduction is a feature of CAM-dominated ecosystems. In CAM plants such as Agave and Opuntia, essentially all of the aboveground tissues are photosynthetic, and this partially compensates for lower rates of CO2 fixation on an area basis. With the noted exception of pineapple and Agave, few CAM species are domesticated, but others have been proposed as potential low-input biofuel crops on land not arable for C3 and C4 crops (Borland et al. 2011; Yang et al. 2015). There is no doubt that communities dominated by CAM plants can attain high biomass (Figure 2.36) and nowhere was this more obvious than during the invasion of 25 million hectares of central eastern Australia during 1846-1926 by prickly pear (Opuntia stricta). 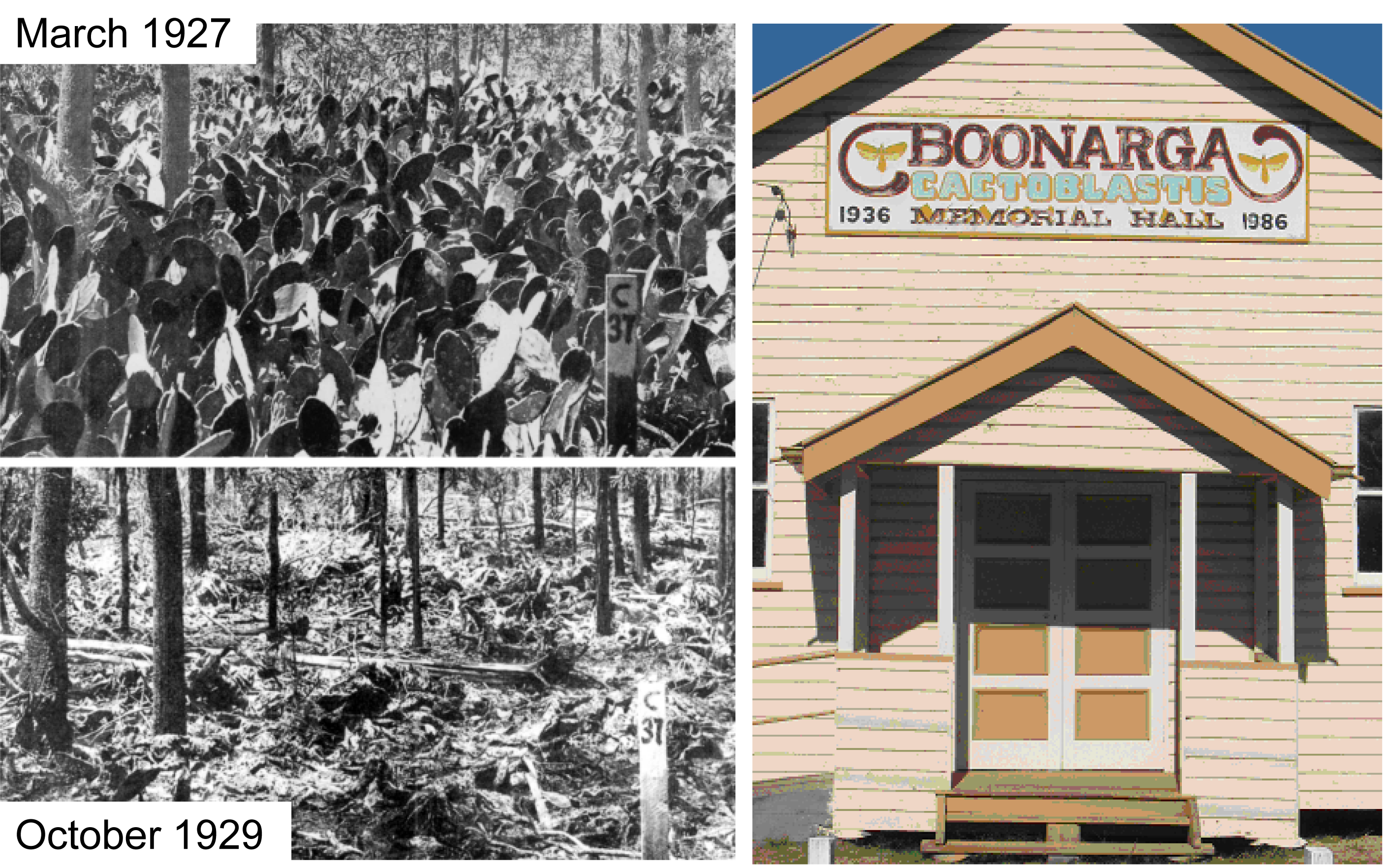 Figure 2.36 High biomass of invasive Opuntia stricta (left) at the Chinchilla, Queensland site C27 before and after release of Cactoblastis cactorum larvae (photos courtesy Queensland Department of Lands 1980) and (right) heritage listed Cactoblastis memorial hall at nearby Boonarga, perhaps the only memorial building to commemorate the achievements of an insect. (Photograph courtesy B. Osmond)

After 2 decades of heroic chemical warfare (hand to hand stabbing or spraying with 10-15% arsenic pentoxide in sulphuric acid at close quarters) failed to restrain the “incubus”, an estimated 1.5 billion tonnes of prickly pear succumbed to trillions of larvae of the diminutive moth Cactoblastis cactorum in about 3 years. Eighty years later, this biological control system remains functionally intact thanks to the remarkably sensitive CO2 detectors in the mouth parts of the female moth that identifies the CAM plant as a target for oviposition by its distinctive nocturnal, inwardly directed CO2 flux in Australian ecosystems (Osmond et al. 2008). The hunger of emerging larvae does the rest. Nevertheless, around 27 species of opuntioid cacti remain naturalised across a range of soil types and climatic zones in the mainland states of Australia. It is not known why Cactoblastis cactorum does not attack a broad range of other feral opuntioid cacti.  In South Australia, with an estimated 1,000,000 ha affected (Chinnock 2015), a control management plan has been enacted (Harvey 2009).

Until the 1980s it was thought that the Australian native flora possessed few CAM plants and that prickly pear had occupied an “empty niche”. Field and laboratory studies by Klaus Winter using acid titration and \(\delta\)13C values demonstrated CAM in the desert succulent Sarcostemma australe as well as drought and salinity induced facultative CAM in Dysphyma clavellatum and Carpobrotus aequilaterus. He also found CAM in rainforest epiphytes and in a diminutive succulent Calandrinia polyandra from sandy and rocky desert habitats. The latter was recently shown to display one of the most overt transitions from C3 photosynthesis when well watered to classic CAM when drought stressed (Figure 2.37).  The impression persists that the warm, dry continent of Australia is either CAM-depauperate or ripe for CAM exploration. On the basis of the size of the Australian flora one might predict around 1,300 Australian CAM species, only about 80 have been documented.